In 2018 a number of Stoeterij Vissers foals are expected! This year a total of six mares are in foal.

Negro
The Glock’s Johnson offspring, Holly, is this year in foal by the beautiful black stallion Negro. The elegant mare descends from one of the biggest dressage horses at the moment. Combine this with the genes of Negro and it is almost certain that this year a top dressage foal will be born in the stables of Stoeterij Vissers.

Numero Uno
Our breeding mare A-Katinka has already given birth to the beautiful Hatinka (by Numero Uno) in 2012. This year she again is in foal by this impressive stallion. A-Katinka descends from Canturo, who was very successful in show jumping under Bernando Alves. They came into action during the Athens Olympics in 2004 and the World Championships in Aachen in 2006. Canturo has produced several approved stallions, including Canturano and Crespo VDL. Numero Uno is one of the leading stallions in breeding. His offspring includes an unprecedented number of 1.60m Grand Prix winners and also a number of Olympic horses. Some examples are Van Gogh, Tamino and Tyson.

Organo Sitte
In 2018, Tylana will give birth to an Ogano Sitte foal. She has already given birth to several foals at Stoeterij Vissers. Broodmare Tylana descends from Caretino. This stallion is best known for his offspring in addition to his successful international sport career under Ludger Beerbaum. Some of his top offspring are Ballerina and Casall la Silla. Ogano Sitte already produced many international jumping horses. He himself was also successful in sports and achieved many successes at Grand Prix level under Dominique Hendrix.

Kannan
Broodmare Tres Bien is in foal by Kannan. She has an excellent pedigree. One of the strengths of her pedigree is, among others, her mother Gera VII (by Leonid). No less than two of her four offspring jump internationally at 1.60m level. For example, Catwalk (by Caretino) born in 1997 was brought out at 1.60m level by Christian Ahlmann (GER). The stallion Kannan does not need any further explanation; he is very well-known in the show jumping and breeding world.

Hardrock Z
The chic Izafee is only five years old, but shows a lot of talent for the sport. That is no suprise with her sire Berlin; one of the best-known sires in jumping. His offspring Zerlin jumped under Jos Lansink to victory in the Grand Prix of Mechelen. Izafee is expecting her first foal from the stallion Hardrock Z. Hardrock Z comes from the best Zangersheide line. He is a direct descendant of Hearbreaker. His father is the well-known Nimmerdor. In short: a line with many international sport horses and sires of great format. 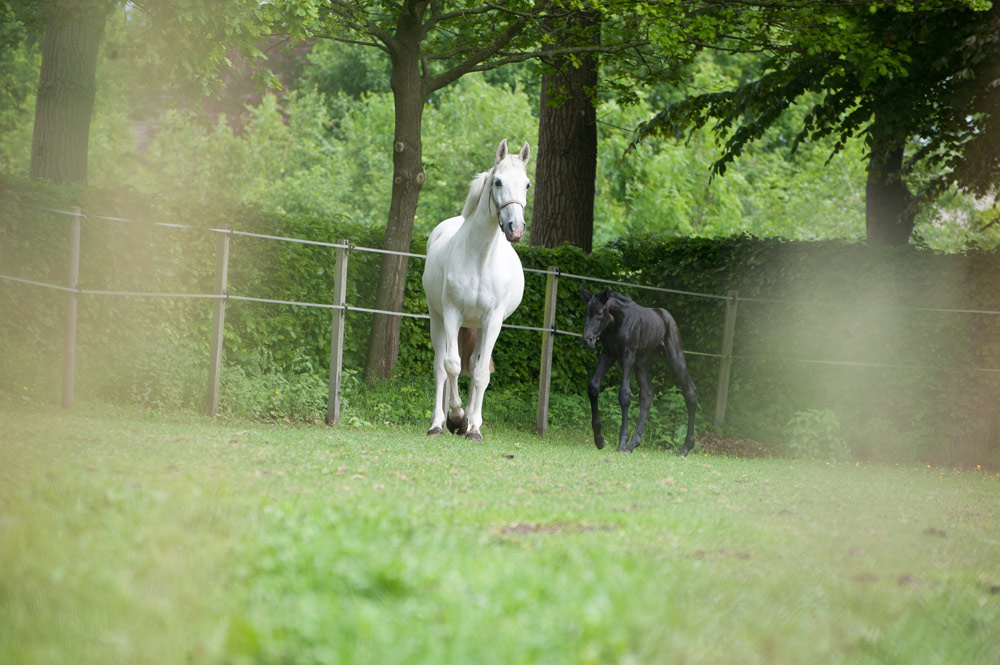